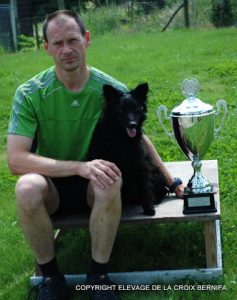 Born in Alost in 1971
First dog: Quirio, a shetland Sheepdog.

Started in 1994 with agility in "Verbond Van Hondenvrienden". The result was of the 6 times participated, 3 times the Belgium Title and a 3th place. In 1997 I started in " Koninklijke Kynologische Unie Sint-Hubertus". The summits over there were a first place at the Belgium Cup (2001), followed by a first place at the Big Prize of Belgium (2002) and a selection for the World Championship agility in Dortmund (2002). Very unexpected I gained with the Team (together with Jean-Pierre Verbesselt and Ides Van Heghe) a silver medal after the Luxembourgers. It's also there, Yvonne saw me running for the first time. Some days after the WC, she made contact with me and we met each other for the first time on the 11th of November 2002.

On the first of April 2003 she came live in with me and my parents. One year later we moved house to our own house in Onkerzele (Geraardsbergen). Actually it was more building yard than a house: there were only 2 livable rooms, the sleaping room was also our living room and bath room. Since then a lot of free time goes to the renovations.

On the range of agility we didn't sit still naturally and in 2003 we gained our 2nd selection for the WC in Lieven (France). With his 11 years, Quirio was to old to clash in the highest level. Meanwhile we bought our 2nd Shetland Sheepdog, Aquila. After she gained the Belgium Cup she might go to the 3th grade quickly. In consequence of health issues (int. al. phantom pregnancy) the good result stayed away and too early I had to offer her due to a renal insufficiency. Also Quiro we had already to offer then due to problems with his kidneys.

So we just had 3 dogs: Ivar and Olos (Yvonne her dogs of the Netherlands) and Erszie, our first mudi after which we had to wait 3 years.

To keep the grass on our grass-land short, we bought our first alpaca, Saana and quickly Oscar followed. On New Years Eve 2007 the first foal was born very unexpected. We called her "Eve". During the years, Rikka, Lima, Barna (unfortunately she died after 5 weeks, due to an infection of the bowels), Dio and Csoki. 7 alpaca's is to much for the grass-land, so we have to look for a new home for our young alpaca's. 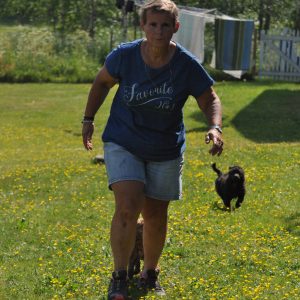 My first dog was Ivar, a Västgötaspets also knowed as a Swedish Vallhund. He was born on the 9th of May, 1989. After his first vaccination, I heared something wasn't right with his heart. He had a birth deffect and he had to be operated. Despite of the succes rate of 10%, he standed the operation well. The advice of the vet was to keep him always calm, so he could be 7 years old. At that time, I had been very stubborn and I went to the agility courses with him. Ivar loved it and we won a lot of competitions. Maybe my pigheadedness was his luck. Ivar have always been very healthy and he had a very active live. He died in November 2006 at the age of 17.5 years.

My second dog, Ravi was 6 months older than Ivar. I got him for free of the breeder, as a compencation for Ivar's problem. Also Ravi was a Västgötaspets and also with him I did agility. Where Ivar was going in full, Ravi prefered to do it on his own way and tempo. So I started to do shows with him. He gained a lot of titles including Champion of the Netherlands and International Champion. Ravi died when he was 7 years old. He ate a toy and that toy pierced his bowels and he couldn't be saved.

In 1998, my Lapinporokoira Olos came. I went fetched him in Finland. Also with Olos I did agility and obedience competitions. Olos had a quite tough character and above that he was very independent. You couldn't let him do 10 times the same and you had to motivate him a lot. On the shows he did it great and also with Olos I gained a lot of titles. Dispite, I had to say goodbye to Olos in Februar, 2011. He was a friend that I'll never forget.

It was in 1998 on the World Dogshow in Helsinki, I saw the Mudi for the first time. And then I already knowed for sure that I will have a Mudi once. They had all I wished a dog could have: they were happy and alert and they always want to work with you and for you. Anyway I had to wait to 2005 for my first Mudi Erszie. After her Feydry and Phantom followed in 2006, Dess in 2009 and in 2011 our youngest one: Empress.

In the meantime we have 7 Alpacas here, like Petrone said. And we also have some Dutch Sabrepaws toddlers. A lot of animals to care for so that means a lot of work and a lot of pleasure!!!!